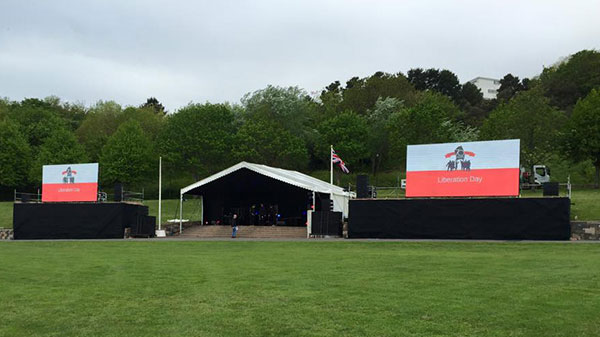 Considered as Jersey’s very own ‘National Day’, Liberation Day 2015 commenced with a Freedom march – a parade, led by bands and military vehicles and vintage cars which all converged in Liberation Square and proceeded to People’s Park for a very moving and poignant reflection on the Occupation of the Island and its liberation by British Troops on May 9th 1945.

The 70th anniversary of Jersey’s liberation was commemorated on Saturday 9th May 2015 with a series of formal and informal events including the Liberation Grand Parade and a formal ceremony, a community afternoon tea party, a food and entertainment event and a night time finale. Members of the public lined the route from Liberation Square to People’s Park.

Lightmedia Displays Ltd were proud to be involved in such a moving ceremony and provided 2 x 27sqm modular LED screens in People’s Park, plus a full production service with cameras/operators and vision mixers.

We were using 5 HD-SDI cameras mixing with our 32 input Broadcast Pix OB unit.

1 was on a Teradek 3G HD wireless link to film the ceremony at Liberation Square, being recorded in the OB van using a Blackmagic HyperDeck recorder, the Teradek also filmed the parade leaving Liberation Square then followed it through the town centre to People’s Park.

We had outputs doing a live and back up HD-sdi feed to the screens, 8 plasmas in total around People’s Park were fed with a live output as well as an output for the World’s media.

The day was ended with a finale firework display.